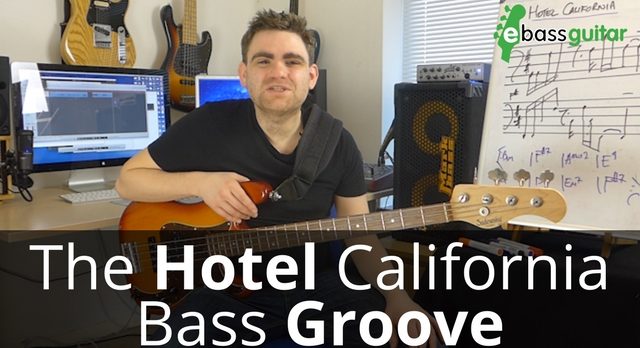 James here. Let's talk about how to play Hotel California on the bass guitar.

... and of course make sure you check out part two right here!

I never looked back.

I was 17 years old and got to play one of the greatest solos of all time.

What was even better I got to do it 10 days on the trot to an audience of over 500 screaming people.

I felt like a rock star (I probably had the ego to match!)

This was one of my formative musical experiences which I think shaped the musician I am today.

What was the solo?”... I’m sure you’re asking yourselves?

It was one of my favourite songs ever… Hotel California By The Eagles.

The next thing you’re going to say is… “but that doesn’t have a bass solo”.

I was originally a guitarist.

Now I hope you’re over the shock of that revelation…!

Around the same period a shift happened which I’m sure you can all relate too.

I started falling in love with the groove and my attention started to shift to the low end.

A couple of years later, the guitar was almost a thing of the past.

I never regret my time on the 6 string because it gave me a crucial understanding of harmony which so important for us low end lovers.

However, one thing has never changed over the years… I still love Hotel California.

In this lesson you'll discover: