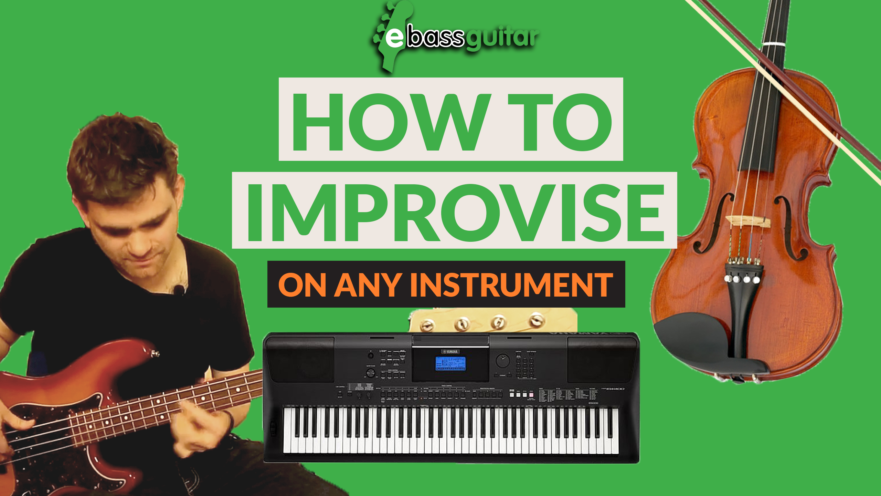 In today’s lesson I want to help you learn how to improvise in less than 10 minutes.

For many musicians improvisation or creating music in the moment can be a daunting prospect… especially if they are thrown in the deep end and just told to ‘make something up’.

For well over 15 years I’ve helped many students take the first steps to improvising and today I want to share a simple concept called the ‘Melodic Embellishment System’.

This system is very simple but also a very powerful way to start approaching learning to improvise… what’s more, these ideas can be applied to any instrument.

From the Violin to Flute, Basson to French Horn, Trumpet to Banjo… The Melodic Embellishment System will work.

This system involves taking a well known melody, simplifying it and learning to embellish it using the 5 simple steps in this lesson..

The melody I’ve chosen to use today is the legendary anthemic outro from the Beatles classic ‘Hey Jude’.

I’ve written out all of the examples below in Treble Clef, Bass Clef and Tablature to cover the vast majority of instruments.

First of all I recommended learning the 4 bar melody to the outro of ‘Hey Jude’.

The next step is to simplify the melody by picking out the ‘Fundamental Notes’. These notes are the important notes that are critical to the sound of this specific melody. I’ve also simplified the rhythm into simple 2 beat notes.

Virtually all of the Melodic Embellishments we’re going to cover today are based on the F Major Scale.  Make sure you are familiar with the F major scale on your instrument to begin with.

In example two we’re going to take exactly the same concept but play one scalic note above.

Next we’re going to combine the upper and lower scalic notes. This is a very common pattern that ‘wraps around’ the fundamental note.

In this example we’re going to approach each fundamental note from one scalic note below which is placed half a beat earlier. If you have a stringed instrument this can work really nicely as a slide.

I’ve also changed the E in bars to 3 & 4 to an Eb because this works better with the chords to Hey Jude.

In this last example we’re going to again approach from half a beat before the fundamental note but use two chromatic notes as our embellishment. If you’ve listened to a lot of jazz or funk music the chances are you’ve heard this sound before!

Lesson Wrap Up & The Next Steps…

Once you are comfortable with all 5 of the examples above the next step is to simply mix them up.

There are countless variations you could create and when they are ‘randomized’ and that’s when the feeling of musical freedom is created.

The last step is to return to the original Hey Jude melody above and start applying melodic embellishments. You’ll discover that some notes and embellishments will work better than others… but that’s all part of the fun of discovering how to improvise.

Good luck and get stuck in!