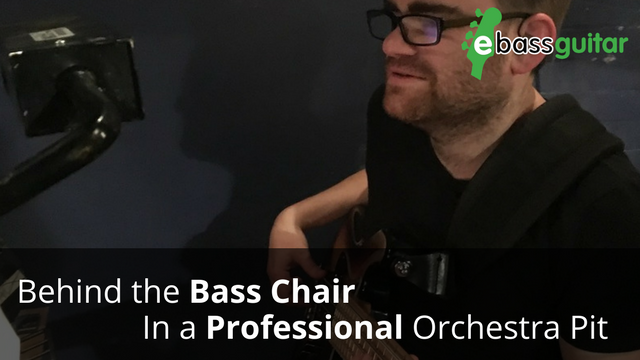 Behind The ‘Bass Chair’ In A Professional Theatre Orchestra Pit

Over the years it’s safe to say I’ve performed on my fair share of professional theatre shows.

Technically, they are very different animals from your average gig, where you just rock up with a bass and amp… and turn it up nice and loud!

In this Facebook Live film I take you behind the scenes of a recent production of the Dolly Parton show ‘9 To 5 The Musical’ I was playing bass on. The cast featured students from the London School of Musical Theatre (LSMT), who were completing a year of professional training, before pursuing a full time career in musical theatre. Whilst strictly speaking not a ‘West End’ theatre production, the aim of the show is to give the students the most realistic experience of what it is like to work in that environment. Hence the creatives (Directors, Costume Designer, Lighting Designer etc) are all professionals with a brief to produce a show of the highest calibre.

Exactly the same happened in the band – a professional musical director, professional musicians… and professional equipment. The great thing about this show from a band perspective is there was very little difference technically, between what you expect to see on a top West End or Broadway production and the setup that was supplied for us to use on this show.

Here is the a walk through of some of the equipment musicians can expect to find in this environment. In a theatre situation the most important thing is that the audience can really understand the story. So when an actor performs, they need to be able to distinguish every syllable that is sung or spoken. To achieve this, sound designers will often want as much control as possible over the volume level of the band. The best way to achieve this is to go for a ‘silent pit’.

This means that there are no monitor speakers for the guitar, bass & keyboards. Removing the amps dramatically reduces the ‘stage volume’ of the band. This in turn means there is less of the band (or ‘bleed’) picked up in the sensitive vocal microphones and the sound engineer can get more clarity and volume for the audience.

So all the musicians can hear each other and get a really good balance, each band member is given an Aviom personal mixer. This is connected to a pair of headphones or in ear monitors. Each musician can dial in their own ‘mix’ exactly how they like it. It’s a very different experience monitoring the bass via headphones and can often take musicians a while to get used to it. Personally, I love the clarity a good pair of ‘in ear monitors’ can give. For this show I used my own ACS T1 In Ear Monitors which have great bass response. I’m less keen on using headphones because the isolation isn’t so good.

The bass I chose for this show was my Sadowsky 5 String Metro P-J. It’s not uncommon for musical theatre shows to be specifically written for 5 string bass because arrangers like the lower register. In a show like ‘9 to 5’ there are also a lot of key changes too, which I personally find simpler to read on a 5 string bass.

For this show I put together a small pedalboard. There were no effects as such…. just a Aguilar Tone Hammer Preamp, a TC electronics tuner and a Morley volume pedal. Musical theatre often contains a huge amount of dynamics, so a volume pedal can come in very handy… especially if you want to achieve notes with a huge amount of punch but at a lower level. The pre-amp will give character to the sound but also a degree more control that you don’t get from a standard DI Box. 9 to 5 used two keyboard players, however it’s not uncommon on a theatre show to have up to  three players. This is because the keyboards often play a lot more than just traditional piano or organ parts.  The second keyboard player may find himself playing a crazy synth part at one moment then switch to a classical bassoon or string part on the next page! To get all of these sounds, one of the prefered ways to do this is to use an Apple Mac Laptop with a piece of software called Mainstage. Each show can potentially have hundreds of ‘patch’ or ‘sound’ changes. The keyboard player will need to use both hands, so patch changes are usually controlled via a footswitch

Possibly stating the obvious, the drummer is normally the loudest part of any band! To allow the drummer to ‘dig in’ and play at a level where he can get the most out the kit many shows will build a ‘drum booth’. This is an area where they can isolate the drums to gain more control of the volume level. In the case of ‘9 to 5’ a temporary drum both was constructed out of draping and acoustic screening. Some shows will have dedicated wooden boxes built or even put the drums in a separate room. The drums will be fully mic’ed up so the sound engineer can create a very precise mix. You may also see electronic drum kits being used if the sound designers wants the ultimate control over the volume… This was common when I first started working in theatre over 10 years ago.

Communication again, will be via a small TV monitor so the drummer can see the conductor. The Music Stand or 'Rat Stand'

A Rat Stand is a heavy duty music stand. It’s not one of those flimsy ones you’ll find in a school music room. This is heavily engineered complete with a light on the top of it, so you can read the music in dark situations. The lighting team will often control these so they can achieve a full black out if they need it at certain points in the show.

This blog represents the set up a bass player may typically see on a ‘pop’ theatre show. Some more traditional theatre shows still choose to monitor acoustically if they feel that is what will make the music sound best

If you’d like to discover more about playing bass on a theatre show, make sure you check out my ‘5 Secrets To Performing On A Theatre Show’ download.

The Most Important Scale Your Need To Learn