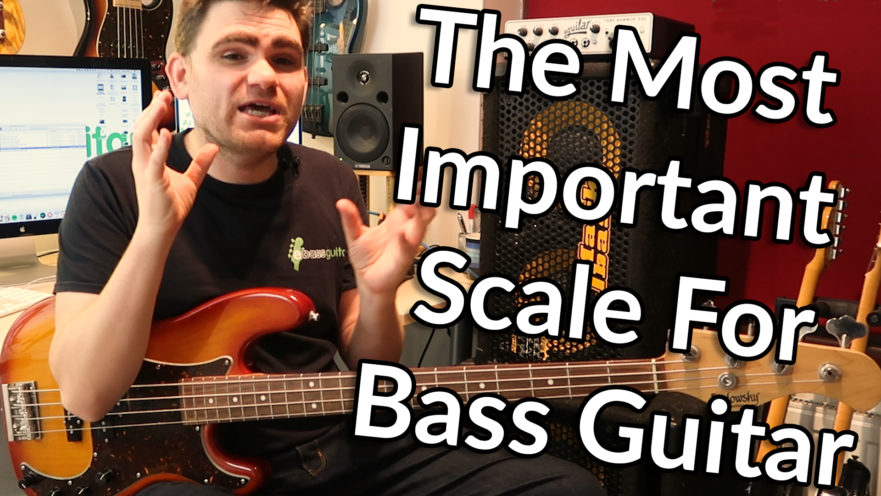 If you're a beginner bassist, the chances are you may be wondering what the most important scale for bass guitar is?

In this bass guitar lesson, I want to strip things back a little and show you why this scale is important and how to use this scale out in the ‘real world’.

The scale in question is the ‘Major Scale’.

Scroll down to the bottom of this post and watch the video and you’ll see everything we discuss in this blog demonstrated.

The Major Scale is the backbone of all Western Music and learning it properly will enable you to play and understand 70-80% of music for the bass guitar.

Pop to Rock, County to Folk, Soul to Funk.... even Jazz & Walking Bass - the 7 notes I’m going to share will unlock the secrets to how these styles of music work.

One last thing before we get going… absolutely everything in this article is directly connected to C Major the scale.

There’s not a note from outside the scale - hopefully this will show how powerful and versatile these concepts are.

Here is the C Major Scale. There are 7 notes (or degrees) of the scale:

The next thing we can do is build a chord off each degree of the scale.

You may already know this concept as the Nashville Number System or Roman Numeral Chord System.

Creating A Chord Sequence From The Scale

Next we’re going to create a simple chord sequence. Here is the I - VI - IV - V chords sequence.

This sequence is literally the backbone of hundreds if not thousands of popular songs. For a list of songs check this wikipedia article

Using the scale diagram above we can deduce the following:

The fantastic thing is we can then take this chord sequence and play it all over the whole neck.

This fingerboard diagram will show where to find each chord. Thinking of chord sequences like this is a fantastic way of learning the fingerboard and gaining confidence changing position.

Next we’re going to create our ‘groove’ by lining up to the pattern and play by the drummer’s kick drum. The counting is written above.

Next in the video I show how adding triads can be super effective. A triad adds the 3rd and 5th to each chord. I’m using the triad to create 2 passing notes at the end of each bar.

In bars 5-7 of this example I’ve inverted the triad which creates a simple but highly interesting bass line.

Let’s add in a fill. The perfect place to start experimenting adding fills is at the end of a phrase or sequence. Here it’s bar 4. The fill has a bracket above it.

Hopefully you can start to see the power of the major scale.

Literally everything in this lesson has been created from 7 notes!

If you’d like to understand more about the theory behind these concepts make sure you grab my book ‘The Complete Guide To Music Theory For Bass Players’.