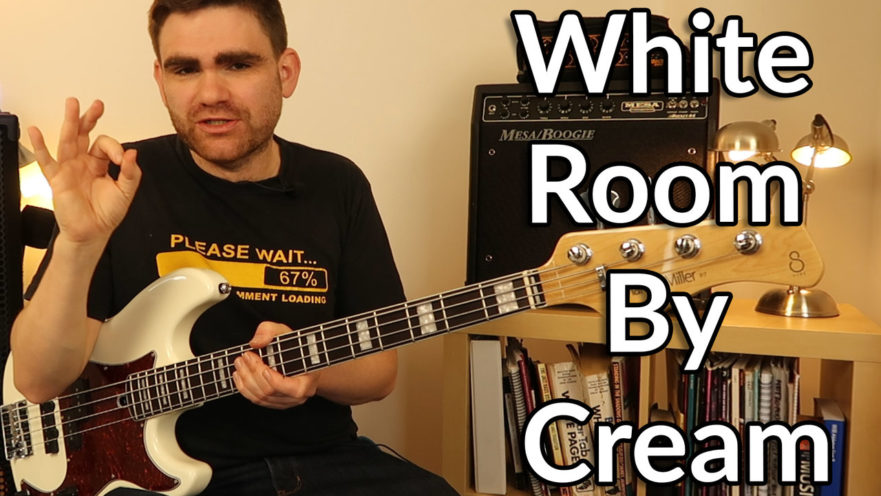 In this bass guitar lesson, we will be taking the legendary bass line from White Room by Cream.  I’m excited to share this lesson as this was one of my earliest influences because it was played by an incredible bass player.. Jack Bruce.

What I'm going to do in this lesson is to show you how to play this song by breaking it down into three basic sections. I'll call them the Introduction, the Verse/Chorus, and the Bridge.

The introduction to the  song only contains 5 notes but there is something super interesting rhythmically that most people don't notice... It's in the time signature of 5/4!

Most of the songs that we play on popular music is in the time signature of 4/4 which means 4 beats per bar but in the introduction of this song, they've added an extra beat of the bar.

The four notes that we need to play for the first four bars are G - F - D - C all notes played for 5 beats. And then the pattern repeats but on the last bar, it changes the time signature to 4/4 and then we hit an A on the first beat of the bar.

Now, let’s talk about the verse..

Unlike the introduction, the verse will now go back to the time signature of 4/4 and the verse is 16 bars long which contains a four bar chord sequence which is repeated 4 times. Here’s what it looks like:

Before we go any further, let's talk about that sequence because there's some really interesting thing that I want to bring your attention to..

We will take it apart because something interesting happens when you hit the G chord.

You see, if we will spell out a G chord, a standard G triad is a G, B, and D. What Jack Bruce chose to do here is play what's called an alternate root or you might have heard it as "slash" chord and he's put the B in the base. And that's exactly what we'll do. We will be taking the G out and replace it with a B instead so you end up with a very distinct effect.

Feel free to check this video out:

Alternate Roots are a nifty device that's used time and time again in bass lines and being familiar with it and being able to use it when playing can help enhance your skills  further.

Now let's go on to the last 2 bars of the 4 bar chord sequence.

On the first part, Jack chooses to play it as it is but in the second half, he chooses to put a little bit of movement in it.

Now the ideas that he uses here are strongly connected to the world of walking bass so if you have seen the "Essential Walking Bass course", you'll see how these ideas are linked together and how the walking bass helps you in playing virtually any style of music.

Now for the Bridge, we'll take a key change to a C where things will get a bit simpler but it will gradually build from there. What Jack Bruce does in this part is play with a simple rock fill to begin with..

So that concludes our lesson for the song Cream!  I hope you’ve enjoyed and have learned a lot from it.  Successfully integrating what you’ve learned from this lesson to your playing will definitely help you enhance your skills further.

If you liked this lesson and wish to learn more, do make sure to check out the FREE 14-Day Bass Lab PLUS membership Trial!

Good luck and get stuck in!